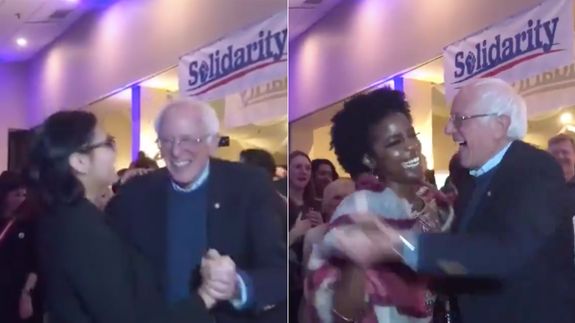 The Democratic presidential candidate attended a “Labor Solidarity” dinner in Manchester, New Hampshire to promote his pro-union platform on Saturday. In remarks he made during the dinner, Sanders said he wanted to make it easier for Americans to unionize their workplaces and double union membership nationwide.

After pledging to take on Trump in the 2020 election, he took on the dance floor. Reporters on the campaign trail caught some delightful clips of Sanders dancing to The Temptations and ABBA.

🚨 🚨 “Our revolution includes dancing,” Sen@BernieSanders said at the end of his prepared remarks tonight. He’s making good on that statement now in Manchester, NH, dancing to “ after a union solidarity dinnerpic.twitter.com/MJmlRKcCvB

Here's why you should make your bed every morning

October 22, 2018 admin Comments Off on Here's why you should make your bed every morning

What We Are Reading Today: The Papers of Thomas Jefferson

February 2, 2019 admin Comments Off on What We Are Reading Today: The Papers of Thomas Jefferson

September 6, 2018 admin Comments Off on 9 Body-Positive Influencers You Should Follow Right Now