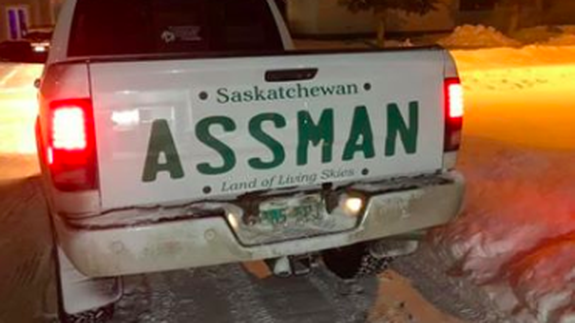 Local government won’t stop the Assman, who can finally display his name with pride.

A Canadian rear end enthusiast in Saskatchewan tried to get a vanity license plate in tribute to his last name, which just happens to be Assman. But Saskatchewan Government Insurance denied David Assman’s request because it was “offensive, suggestive or not in good taste,” the Saksatoon Star Phoenix reports.

SEE ALSO: The pinching hand emoji will only be used for small dicks

“Well I’ve never seen the government respond so quick, I sent my appeal in at 1 this afternoon!” David Assman posted on Facebook. “Of course it was denied in 4 hrs with no name attached to it.” Read more…

Miss England returns to her career as doctor to fight coronavirus

April 7, 2020 admin Comments Off on Miss England returns to her career as doctor to fight coronavirus

Pink emailed Robbie Williams by mistake thinking he was someone else

May 11, 2018 admin Comments Off on Pink emailed Robbie Williams by mistake thinking he was someone else

April 18, 2021 admin Comments Off on Soak in the epic awkwardness of John Boehner calling Chuck Todd 'a shit' on live TV